On Monday we will begin some basic recording.

For each of your "scripts" that you are working on groups, as you script I want you to consider what codes and conventions you should consider. What are CODES and CONVENTIONS? When we discussed in class topics like "What does a typical drama show include?" we were actually already discussing these, just not by name.

Codes are systems of signs, which create meaning. Codes can be divided into two categories – technical and symbolic.

Technical codes are all the ways in which equipment is used to tell the story in a media text, for example the camera work in a film.

Symbolic codes show what is beneath the surface of what we see. For example, a character's actions show you how the character is feeling.

Some codes fit both categories – music for example, is both technical and symbolic.

Conventions are the generally accepted ways of doing something. There are general conventions in any medium, such as the use of interviewee quotes in a print article, but conventions are also genre specific.

Codes and conventions are used together in any study of a genre – it is not enough to discuss a technical code used such as camera work, without saying how it is conventionally used in a genre.

For example, the technical code of lighting is used in some way in all film genres. It is a convention of the horror genre that side and back lighting is used to create mystery and suspense – an integral part of any horror movie.

*** You will need to consider this in your scripts. On Wednesday, March 21st, we will “round-table” all of your scripts. Groups will have the opportunity to ask questions of other groups. In the end we will be “producing” one of your shows in class and as a class.

Confused? Look at this: https://www.slideshare.net/JasonsA2Media/codes-and-conventions-of-the-thriller-genre

Reminder of the Unit 1 Test on Monday, March 19th.

Please be familiar with: Conflict Theory, Symbolic Interactionism, and Functionalism.

In this Introduction to Digital Sound assignment you will create a “Microphones for Dummies” presentation/guide. Be creative and use your skills you have developed in this course so far to create pictures for your examples, instructions, etc.

You will need to explain: Dynamic Microphones\Condenser Microphones
>  Their uses and differences

Ribbon Microphones
What is a frequency? What is frequency response? Why is it important in understanding microphones and different mic’ing situations?

You can use the following link for help: http://blog.shure.com/choosing-the-right-mic/

As a class we will view Michael Moore’s “SICKO”. During the movie you are to write down 20 points that are made that may seem questionable to you. You will hand these in attached to the back of your essay.

For your essay you are to pick three (3) of these points and critique them to the best of your ability. Are they true? Partially true?

Whether you are agreeing or refuting one of Michael Moore’s points you are to back it up with quality sources. Please make sure that the sources are accurate to the time period of the filming of the movie as well. (Example: Do not use a 2017 fact point to prove or disprove a point made in 2004)

Please source on the page and provide a “Works Cited” page attached to the back  as well.

(Each answer, whether proving or refuting, is worth 10 marks. You will lose 5 marks for not providing a “Works Cited”, 2 for not having a proper title page, and 3 for not sourcing on the page. This rule will now apply for all assignments!)

Sociology 120: The Wisdom of Sociology

Please watch the following video on "The Wisdom of Sociology" from a TEDx Talk.

You will write a reflection on the video but concentrate more on what you think Sam Richards meant by "sociology up here".

Everything we are going to keep doing in this class will be preparing you for your film porjcts coming towards the end of the semester. You'll notice on the morning announcements we often overlay the video with a logo or a watermark. When we do this it needs to be a .PNG file with a transparent background.

You will create a logo with a transparent background of your own, it can be school related if you wish.

You are going to create a 8.5 x 11 Photoshop layout with 300dpi resolution (open photoshop, click "file", "new" and click the dropdown preset to "U.S. Paper").

Your poster will contain the following: • 3 Text layers • 3 different brush sets with effects • 3 Pictures from the Internet (copyright free)

Your poster can be for a movie/video game, concert, TV show etc.

Please be sure to check out the following link: http://www.makeuseof.com/tag/5-basic-principles-graphic-design-take-granted-everyday/ (link is external)
You will need to explain to me how you used PROXIMITY, ALIGNMENT, REPETITION, CONTRAST, and possibly WHITE SPACE for your design.

Today we want to look into media bias. What can we trust? What can't we?

You will pick a major news network and one major newspaper and research and answer the following questions:

1) Who owns it? What else do they own?
2) How do they make money? Advertising? Subscriptions?
3) Who advertises with them? How much does it cost?
4) How much is their business worth?
5) Do they (owners) donate to any political campaigns?

You can just use Word for this. When finished you will print these off to use in a class discussion and hand them in.

Please watch these videos when you get a chance: 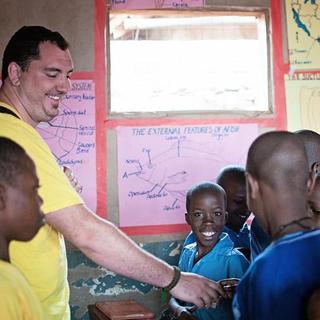